Trip to the Zoo

Today was our day to go to the zoo. Two groups from my work at FedEx enjoyed a catered barbecue lunch at the Primate Pavilion and then they got ready for a scavenger hunt. Rather than join in on the scavenger hunt, I had cleared it with the powers that be to lead an informal drawing class while demonstrating and drawing animals.

Three of my coworkers and I headed off to the carnivore location. I wanted to draw lions and tigers. I found a lion lying fairly stationary in the grass and proceeded to start a drawing. I coached the group in the basic drawing skills including drawing the whole shape first with big sweeping strokes and getting all the angles right. Then and only then do we start on details. Here is the quick sketch of the lion. She did not want to hold her head still, but I did the best I could:

As we proceeded around the corner we came to the capybara's…the world's largest rodent. Again I went for the big curves and angles first: 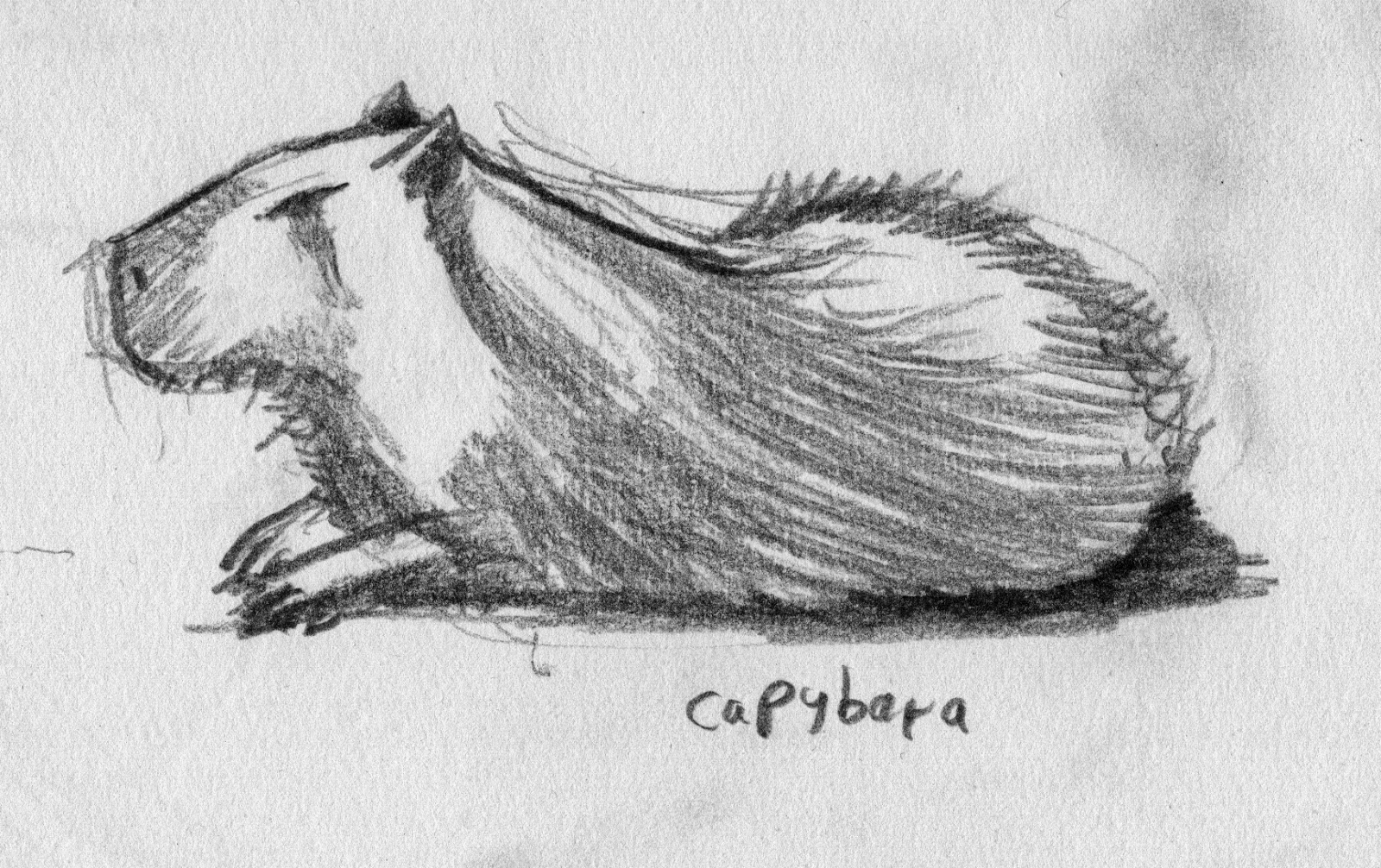 Cynthia Jones (CJ) did a good job with the Capybara also. Here is her version: 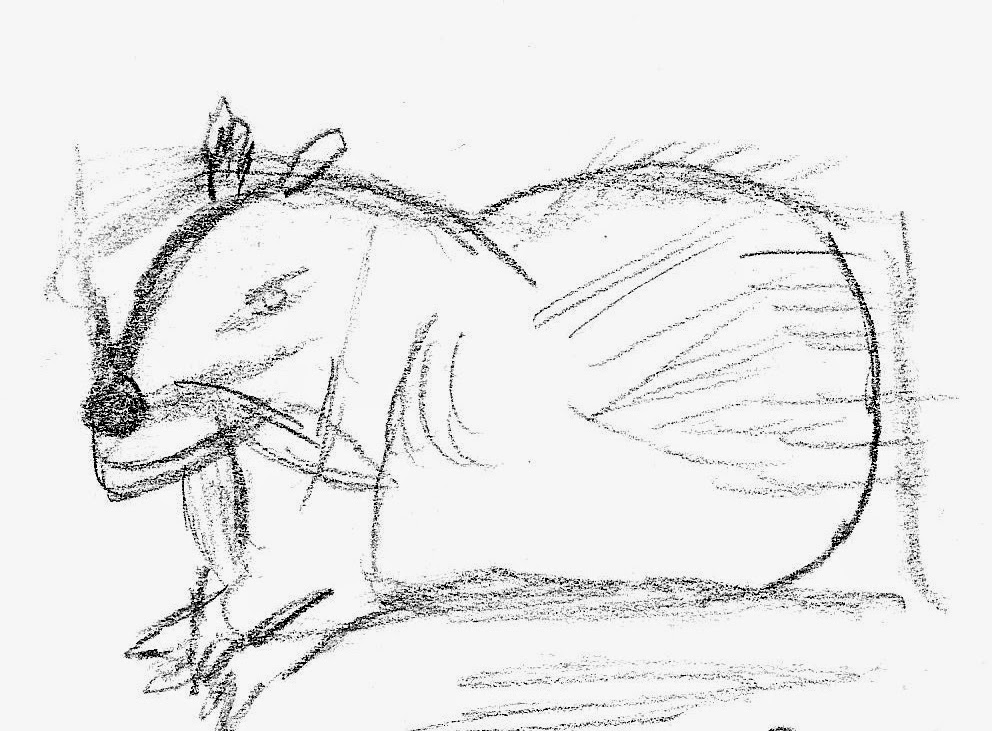 We went into this place where we could see another lion by looking through a small glass window. The lion was lying on a rock right underneath the glass. We started drawing, but we were assaulted by a busload of kids who wanted to look around us. One kid was actually pushing me aside. We retreated before we finished our drawings. 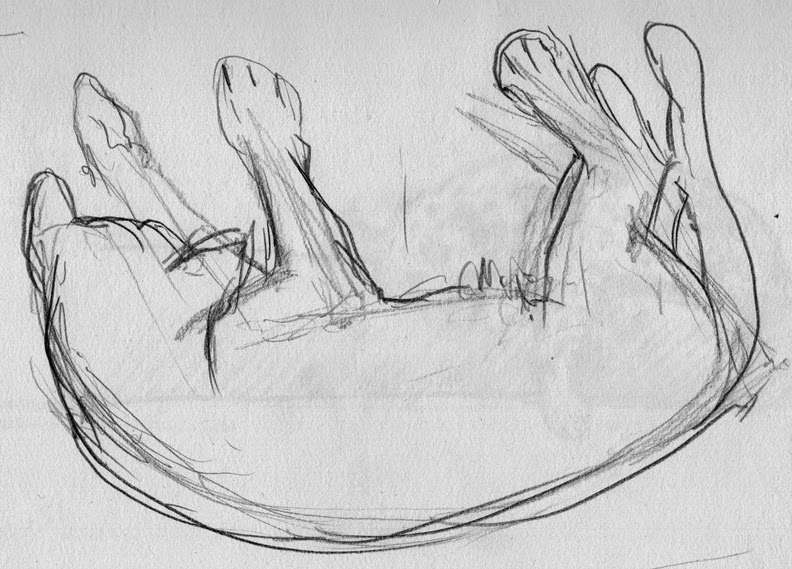 Ida Green had the same problem I did with the crowds.
Here is Ida's version: 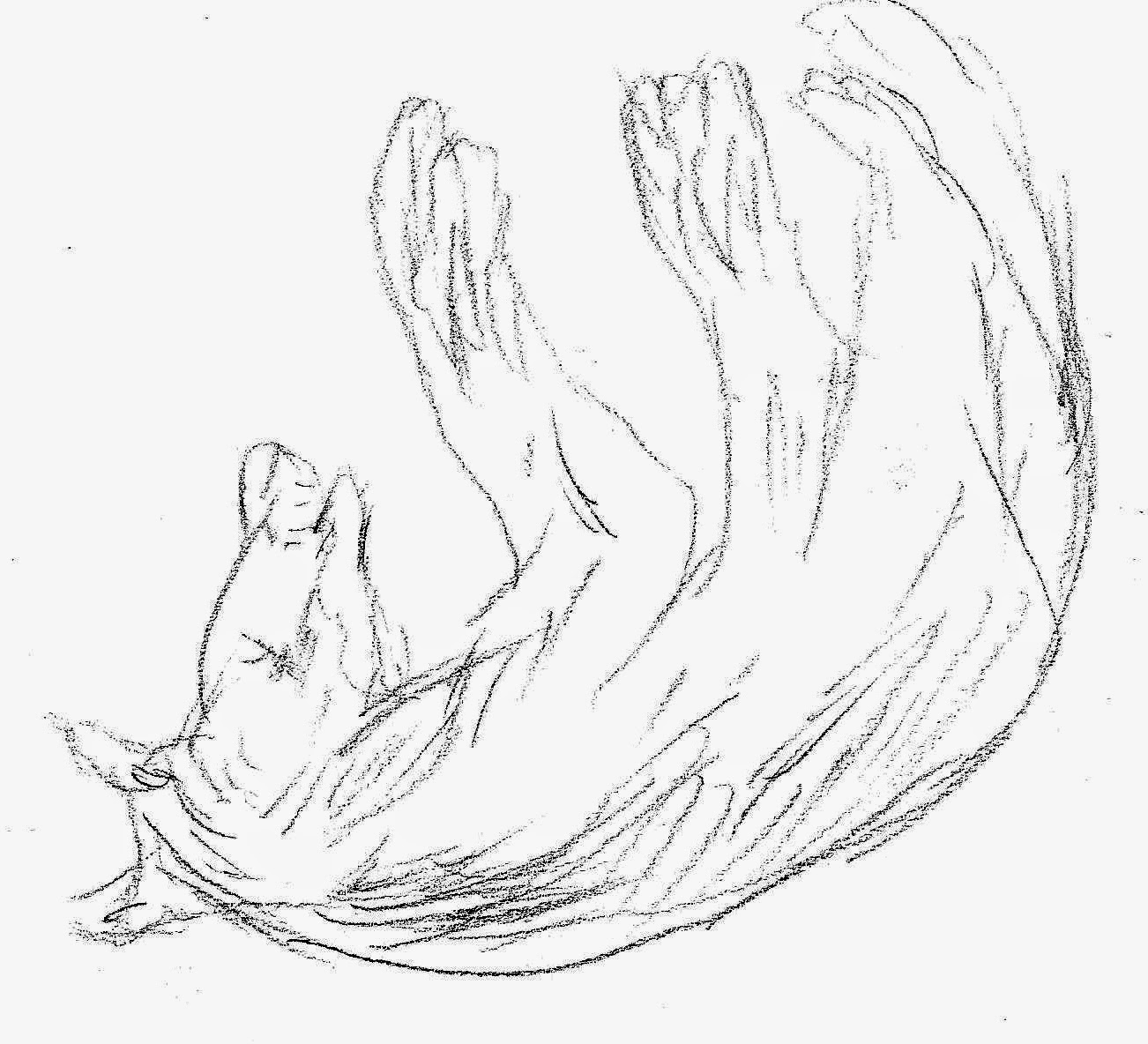 Next we saw the jaguars. There was a black one on the ground and the spotted one lying on this elevated log. Just as I finished drawing the tail, the black one jumped up on the log and they both wrestled each other  to the ground in a semi-serious fight. 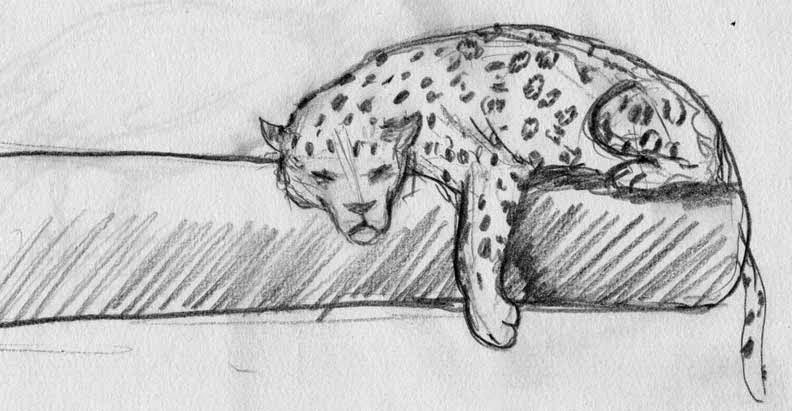 Ida did a good job with her jaguar: 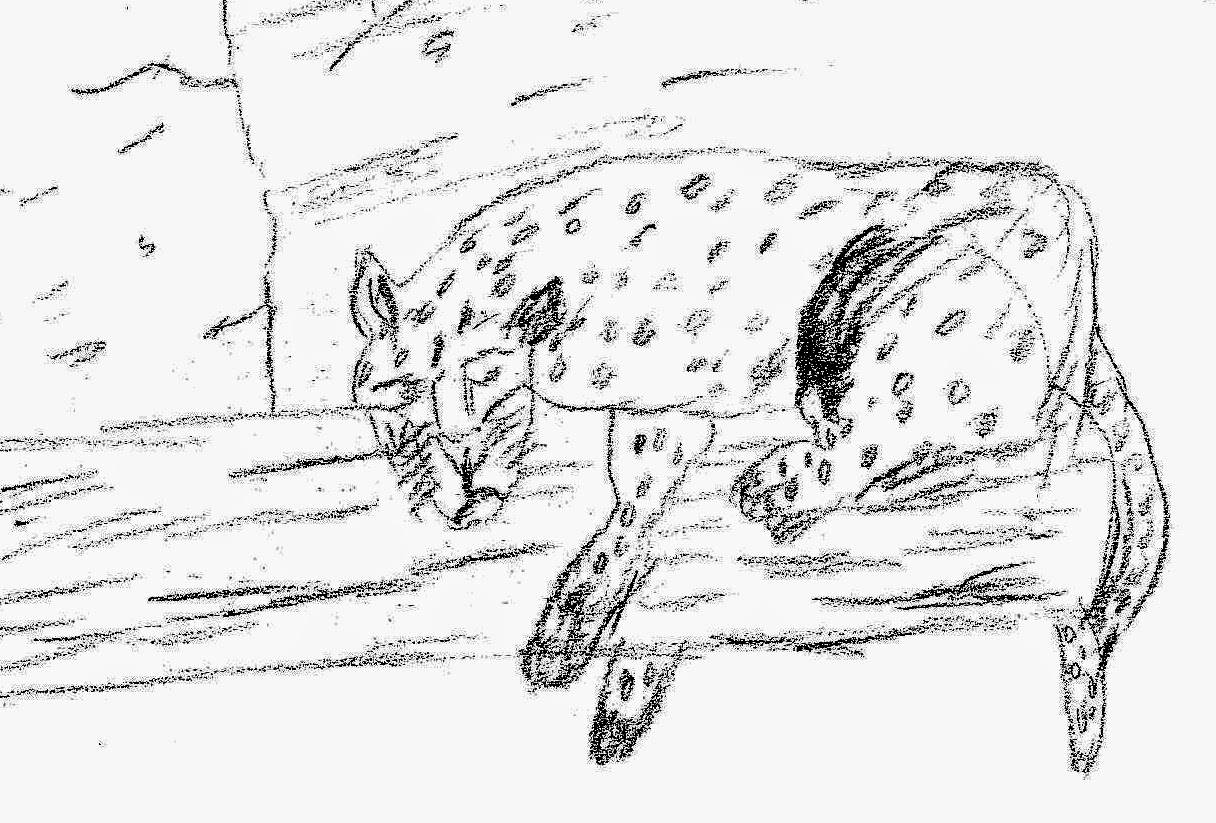 We headed back in the other direction and on the way we stopped to draw the crested screamers in the capybara enclosure. They were constantly moving, but I was able to capture this one by looking at both of them to get the details right. 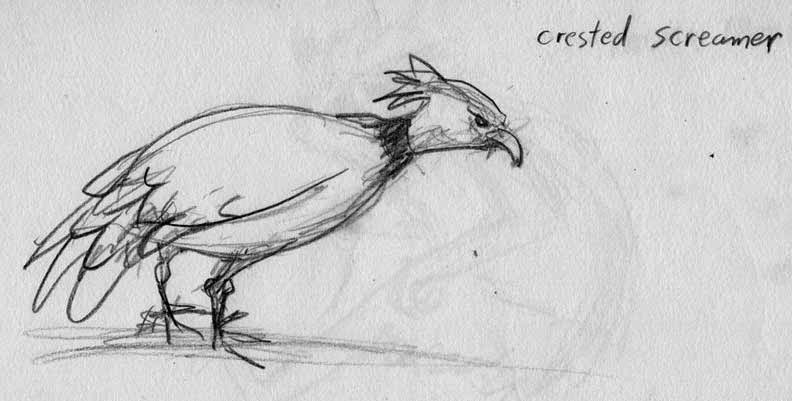 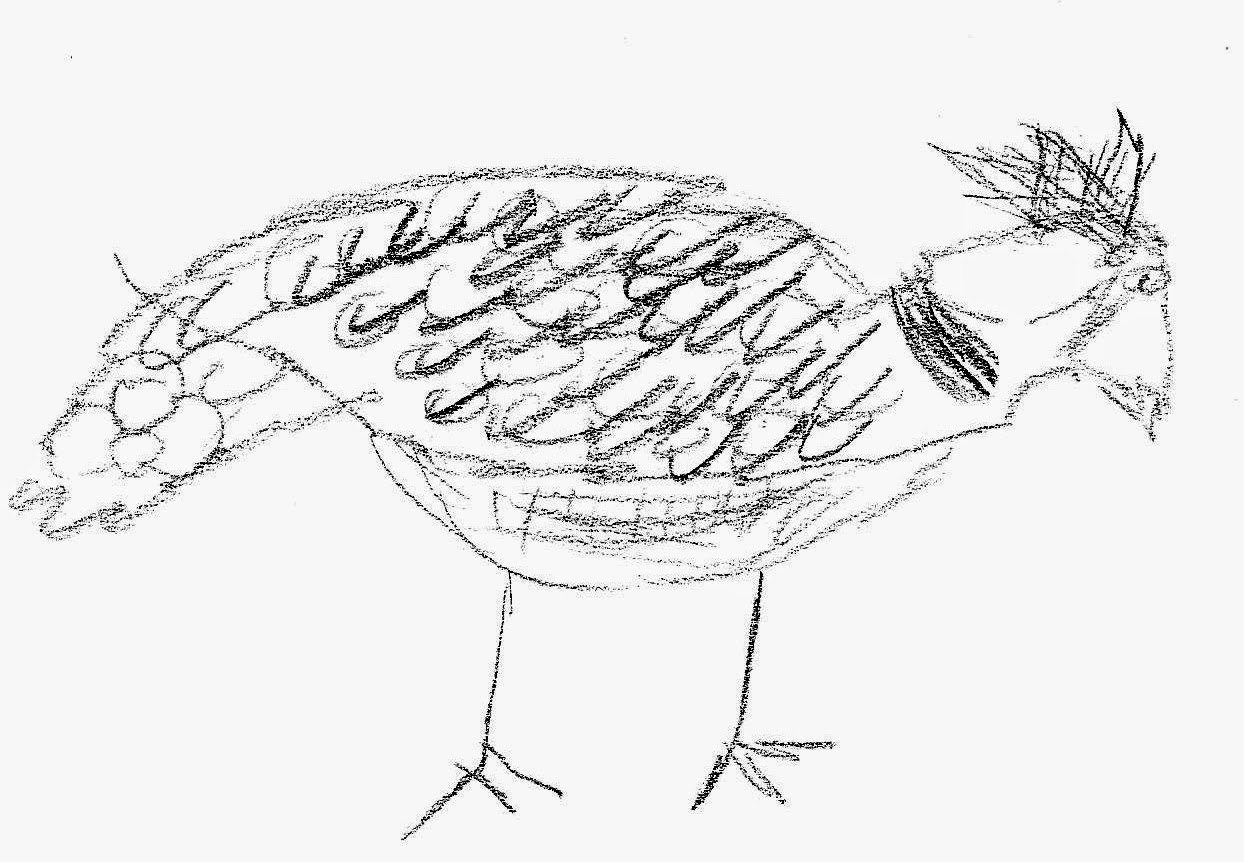 Next we headed for the monkeys. I wanted to draw at least one gorilla or some kind of monkey. We got to the general area and as I was talking to one of my coworkers, a little girl came along and started pulling on my pants leg. She wanted me to come with her and sign her little notebook. All she wanted was the signature of a real artist! It was the cutest thing I have ever encountered. Then I looked up and saw we were right next to the Mona Monkeys. I proceeded to draw one of the monkeys while the little girl chattered in my ear the whole time describing to her mother what I was doing and how I was going to draw one for her in her book. 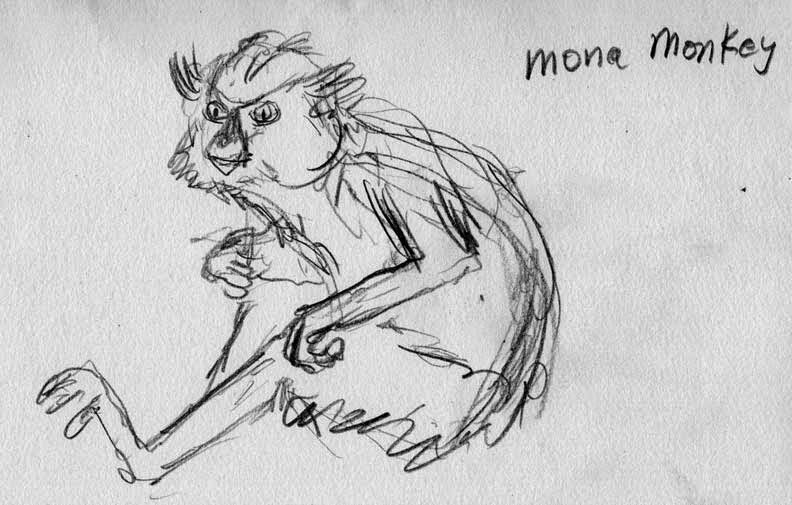 Below is CJ's version: 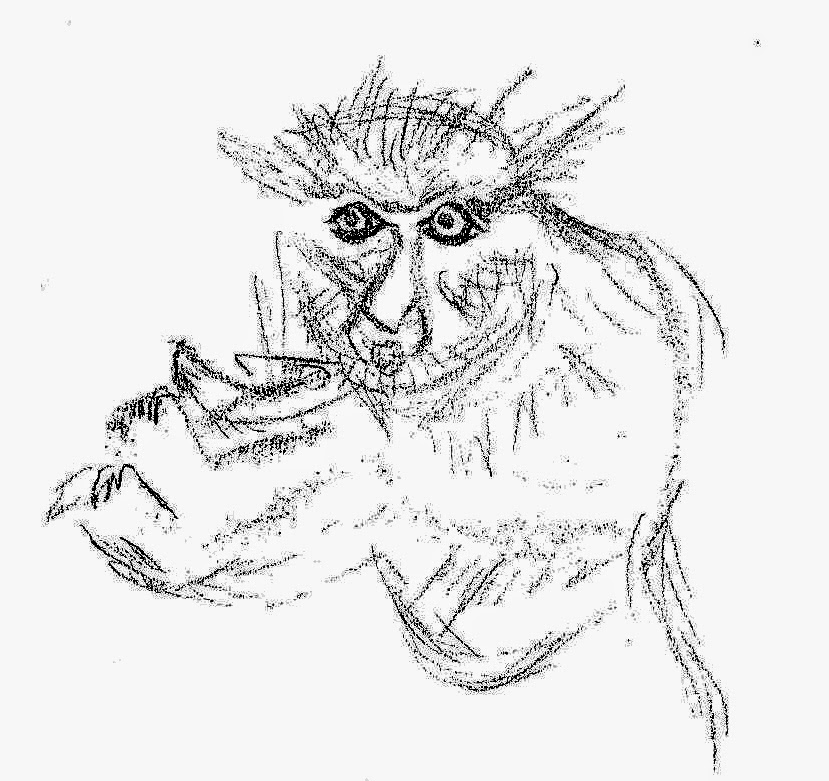 She told me her name was Alexis. Rather than draw a tiny monkey in her little notepad, I drew Alexis face in my sketchbook and gave it to her: She wrote her name on the bottom. 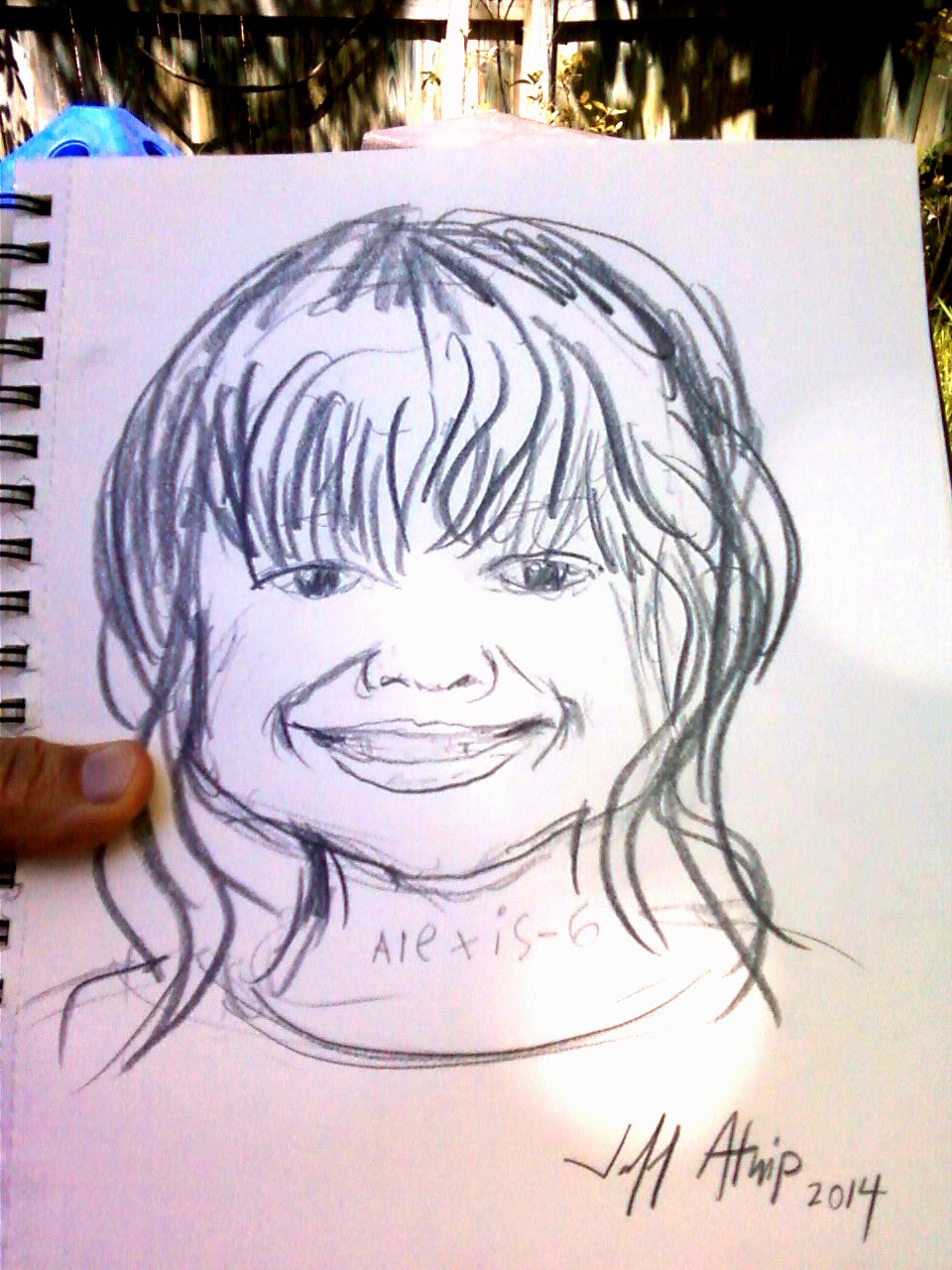 And here is the the real Alexis with her notepad: 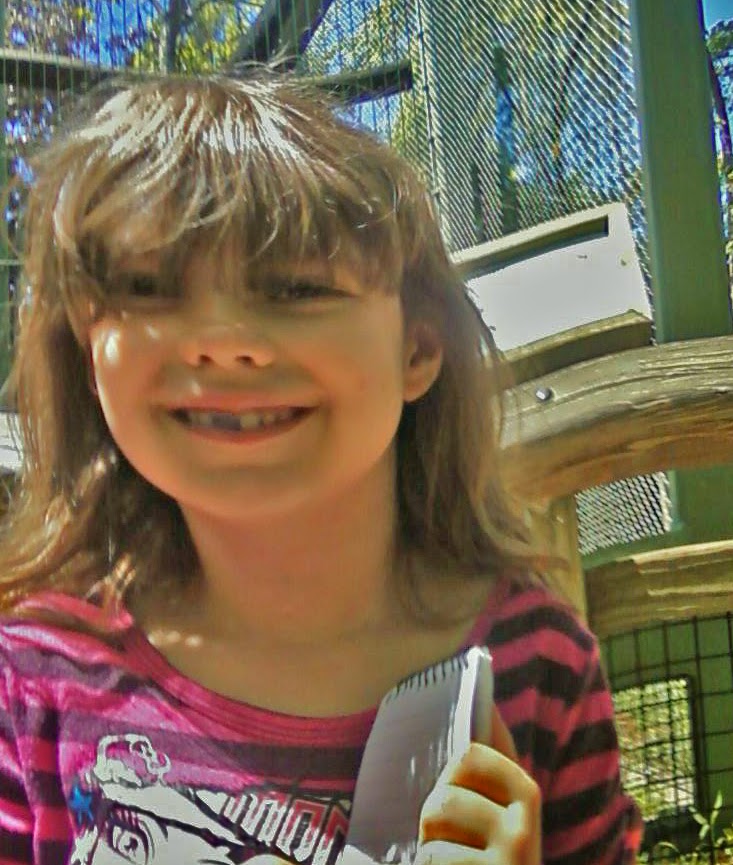 A phenomenon I noticed, which I have noticed before, is when I am out in a public place sketching, a large percentage of the people who see me, talk about how they wished they had brought a sketchbook too. Alexis' mother wanted to sketch so badly when she saw me that one of my coworkers let her borrow her sketchbook and she proceeded to draw part of the Mona Monkey.

It was a fun day. We were "in the arena". We honed our skills and left with a pleasant tiredness.

This design is based on an old Magnolia tree in Elmwood historic cemetery in Memphis, TN. I was attracted to the textures and various colors I saw. The contrast between the old and the new was exciting. 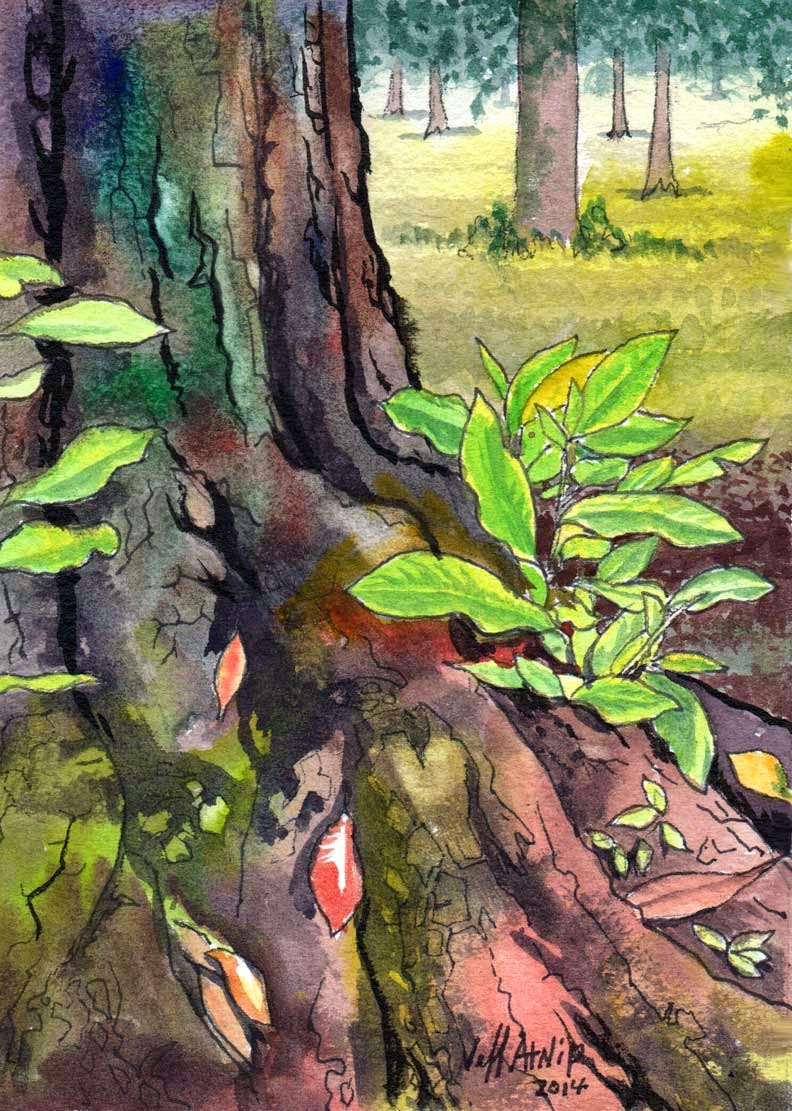 Posted by Jeff Atnip at 4:42 PM No comments:

I never thought about selling this until I saw some other celebrity portraits on sale here. So…I did this some time ago while watching one of the greatest TV shows of all time. I enjoy doing caricatures occasionally, and this one was fun.Men! Welcome to the rock! 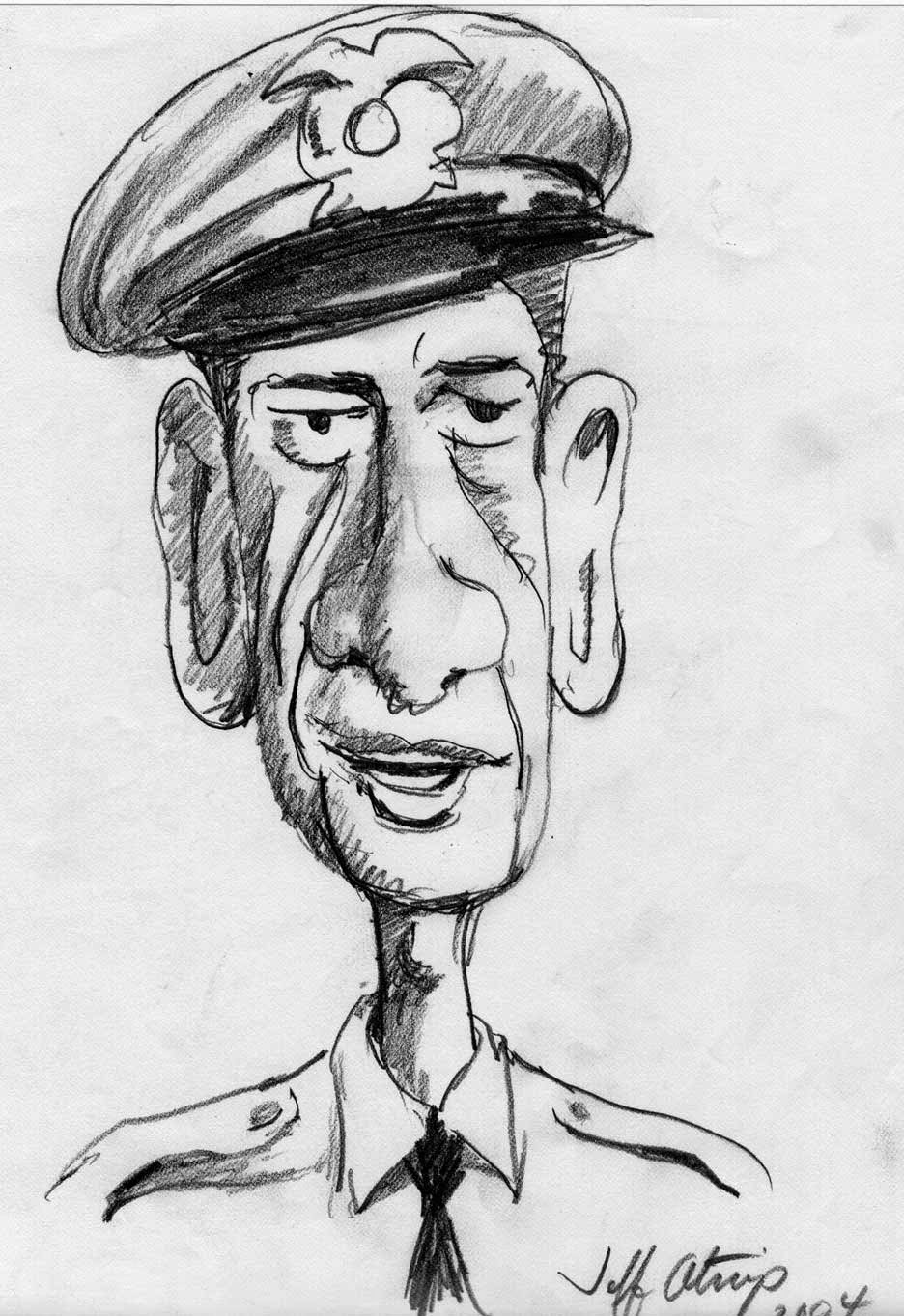 Posted by Jeff Atnip at 6:38 AM No comments: 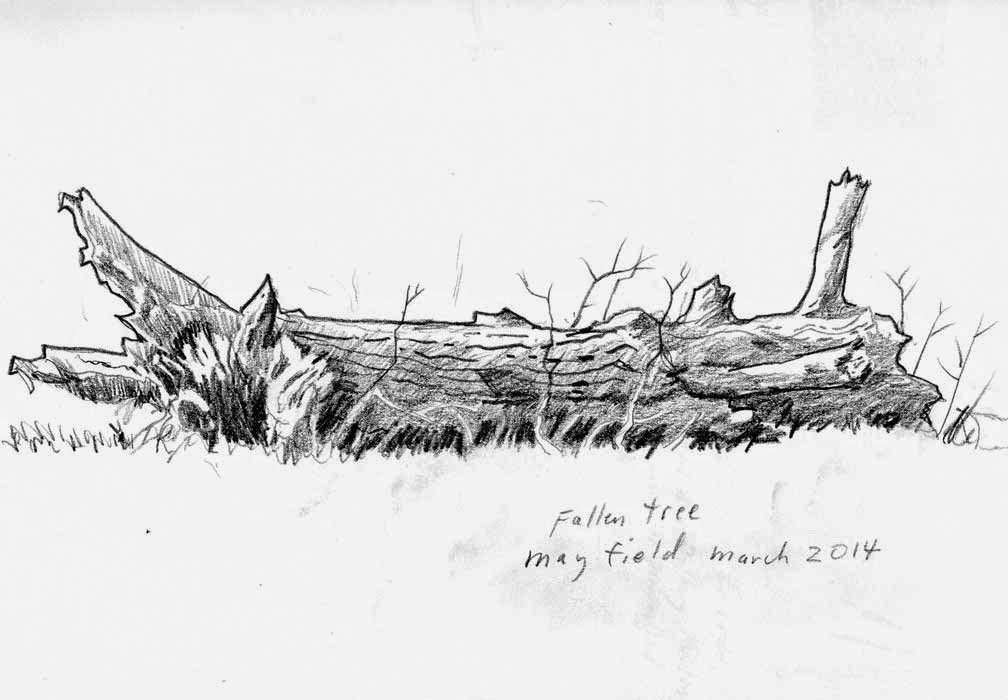 This is another view of my previous "Fallen Tree" posting. This is a bit less dramatic of an angle. It is more of a restful pose. Just the thing to rest your eyes upon as you sip your morning coffee.I just noticed I forgot to sign it…it will be signed before I send it out.
Posted by Jeff Atnip at 12:31 PM No comments:

Boy On A Horse

This is a ball point pen drawing on acid free paper. The image reference is from a trip to a Colorado guest ranch I took back in 2007. Some of the guests were getting ready for a ride. 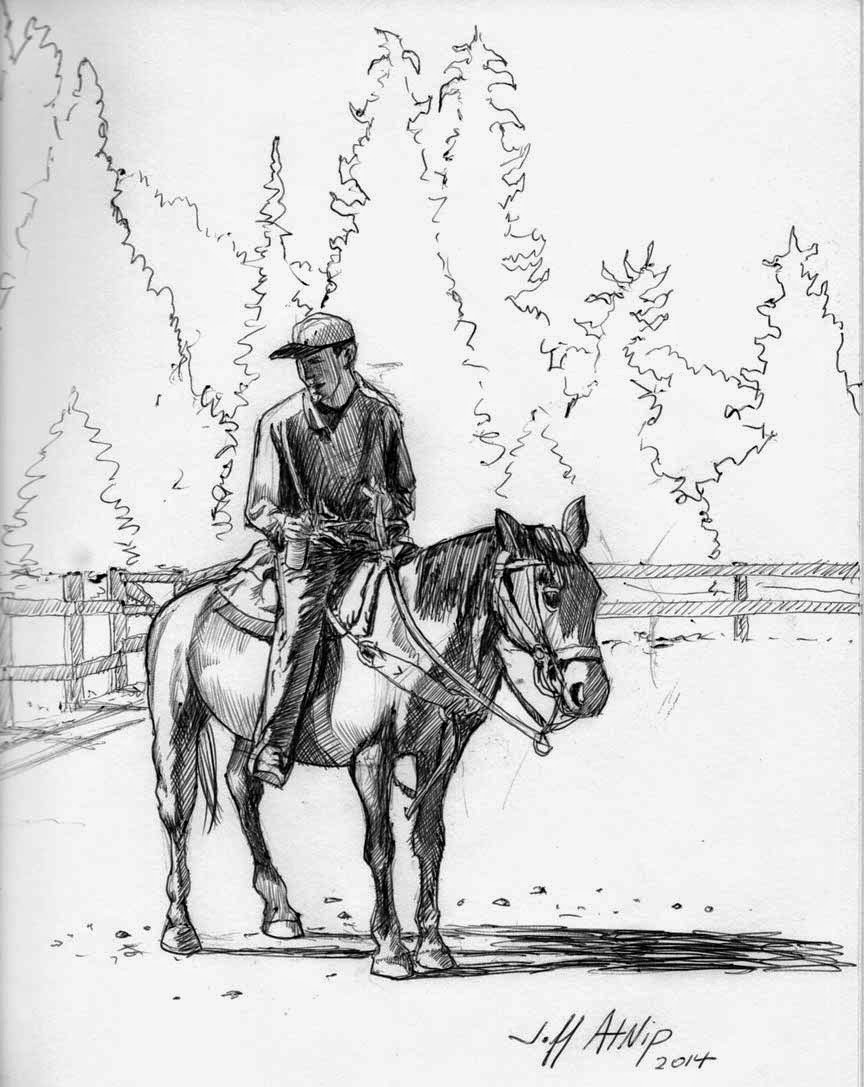 Posted by Jeff Atnip at 3:57 PM No comments: 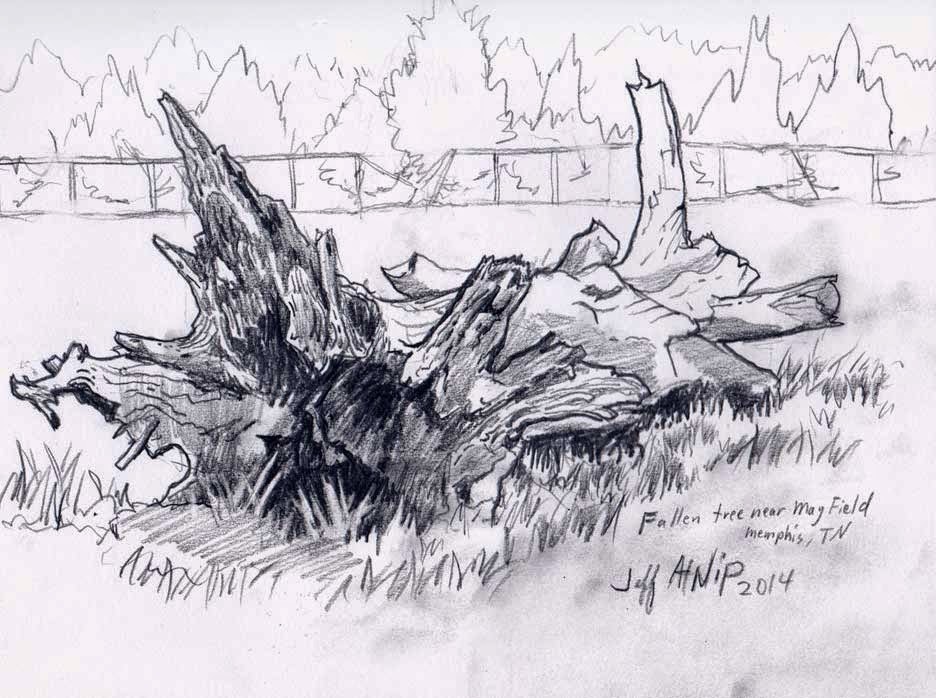 Posted by Jeff Atnip at 5:45 PM No comments:

Have you ever had that lonesome highway feeling, coming home after a long trip as the evening falls? I tried to put that feeling into this design. 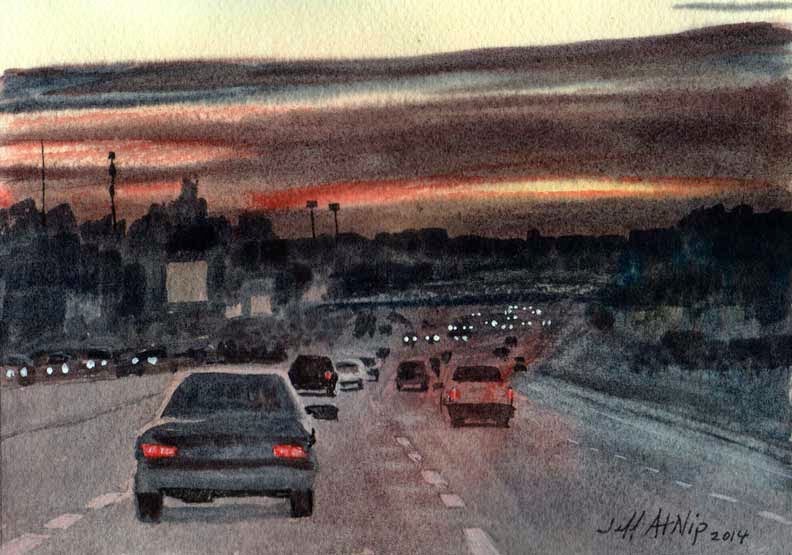 Posted by Jeff Atnip at 6:09 PM No comments: 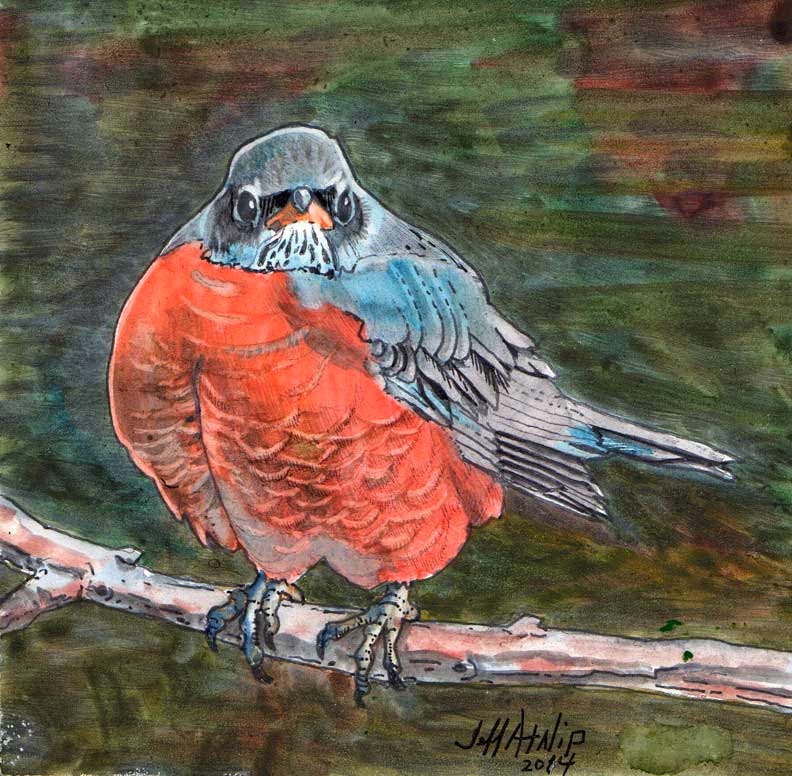 Posted by Jeff Atnip at 6:58 PM No comments: